Happy Monday! It’s time for yesterday’s sermon. I have to be honest here. These are 100% Pastor’s notes, so you are 100% hearing from Pastor Dave, but the posting in this format is 100% the Pastor’s wife. (Including this little intro). **Now switching to I= Pastor’s wife** I can not post without mentioning that the tone and passion behind this sermon was powerful. The notes, although they are good standing alone, are truly brought to life as you watch Pastor Dave’s passion and love for God’s word and how these stories can enhance our walk with Christ. If you are in the St. James, MN area, I can not express enough how much you need to plan to attend next Sunday. These notes will come to life, and you will be glad you set the 1.5hours aside to start your week in such a way.

Please join us Sundays at 10a as we continue in this journey through the Bible. It’s life changing!

Okay… back to Pastor Dave…

Remember way back when we started looking at the Exodus, and God had the Israelites go the southerly route mainly to strengthen them as a nation because they were not prepared to fight the Philistines and whoever else on the shorter, northern route to the Promised Land?
So He established them as a nation and gave them instructions on how to worship Him, which would be the foundation of the nation of Israel. This takes about 2 years and they head up to Canaan, only to freak out and be banned from the Promised Land. SO as we’ve already mentioned, what we are reading about now is the new generation of Israelites that will be going into the Promised Land. But just as God established the “nationhood” of the earlier generation, so He does it with this one. The good thing is they already have the instructions on worship and other various laws, they have a new high priest in Eleazar as we saw last week, and now they need to learn to depend on God to win the battles that lie ahead and that is what we see the beginning of here in Numbers 21.

As we just said, Eleazar is the high priest and this happens at Mt. Hor which is on the border of Edom according to Numbers 20:23. Let me show you this map. *Red line shows their route. 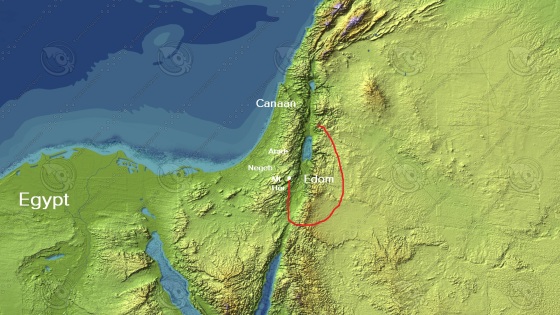 Remember, they have to go around Edom, but they run into a serious issue before they’re about to leave after mourning the death of Aaron.

Look at Numbers 21:1. What you have here is a king who seizes the opportunity to attack a nation that literally has its back turned towards him because they’re about to head south to get around Edom to get where God wants them to go. What we’re about to see here is that though this generation can complain as well as the previous one, there are some differences.

Look at Numbers 21:2-3. Now as we get into this, let’s take note of something important, because if we don’t, we may read the Old Testament incorrectly and be stuck with thinking that we’re following and commending the actions of blood thirsty savages. This is not the case at all. We’re about to see quite a few battles over the next few chapters, then there will be a bit of a lull in war stories in the book of Deuteronomy, and then the war stories pick back up in the book of Joshua.

Understand that it has been 500ish years since the people, chosen by God through Abraham, have been in this land. The current inhabitants have been heaping sin upon sin, and have come against God all these 500ish years. What God is on the verge of doing is not just giving Israel the promised land back to them, but dishing out judgment upon these nations through His chosen people.

So what we see here, and we will see often in future battles is absolute destruction. We’re talking about leveling out the cities completely, killing all men and women, and at times children, and usually keeping animals as plunder. Why? Because they are against God, and God has always declared that if you do not follow Him you will be destroyed. What many people get concerned about, is they only concentrate on the discipline and punishment, and ignore the blessing that comes with following God.

However, we are told that we do not fight against flesh and blood, but against powers and principalities (Ephesians 6:12), so how does a story like this apply to who we are as New Testament believers? A rule of thumb that I learned some time ago, and I think I’ve mentioned this before with you guys, is when reading the Old Testament, whatever we see take place in the physical realm of the Old Testament, needs to take place within spiritual realm of the New Testament. Israel in the physical realm completely destroys this nation that has come against God. We saw this verse a few weeks ago, but Paul pens through the power of the Holy Spirit in 2 Corinthians 10:5, “We destroy arguments and every lofty opinion raised against the knowledge of God, and take every thought captive to obey Christ…” Just as the Israelites were to destroy those who would come against God in the physical realm, we are to destroy that which would come against God in the spiritual realm. We are to destroy the ideologies that we face each day that draw us away from the Word of God.

So after this victory, the Israelites head out. Look at Numbers 21:4-5. Well that was quick…they just had a victory over their enemy and now their ticked off. Why did this happen so quickly? The Israelites were focused on only the here and now. And the here and now is “We have just gone in the opposite direction of where we want to be! We are back to the desert,  stuck eating the same manna we’ve been eating for 40 plus years!”

They’re only focusing on the current discomfort, and not looking at the future victory in God.

There’s a great lesson to learn here, of course. We’re going to go through hard times. In fact the Bible is pretty clear that things are going to get worse around us, but we need to look forward with hope to the amazing future God has for us in which His son will return, and completely destroy everything we see now, and recreate it to be perfect where there will be no pain, suffering, sickness, sorrow, etc.

Psalm 30:5b, “Weeping may tarry for the night, but joy comes with the morning.”

There is an inherent danger in becoming angry with God when solely focusing on our current struggles.

Look at Numbers 21:6. These serpents weren’t literally on fire. It’s more probable metaphoric language showing a combination of the snakes possibly being red/orange in color and an extreme burning sensation from their bite.

Out of this, though, we see another subtle difference in this generation from the previous generation. The former generation had extreme difficulty in recognizing their own sins before God, think about Korah’s rebellion and the plague on the 250. Moses goes to bat for them, but they never say anything. However, look at Numbers 21:7. This generation seems to be more attuned to their sin and their desire to be saved from it.

So God has a rather interesting way of delivering the people, Numbers 21:8-9. Understand this, God did not instruct Moses to make an idol. The people were not instructed to worship it, but to simply look upon it to be healed. The Israelites will keep this bronze serpent on a pole. I would think the intent of keeping this is meant to be an artifact to remind them of God’s grace and power in this situation. There wasn’t an intention to worship it, but when they looked upon it, they would remember the Lord. God allows us to do this.  Rocks represented battles won along the journey. We have crosses to remind us of Christ’s act of redemption. But we cannot worship those artifacts. Which, sadly, Israel ends up doing much further down the road with this bronze serpent. 2 Kings 18:4, “And (King Hezekiah) broke in pieces the bronze serpent that Moses had made, for until those days the people of Israel had made offerings to it (it was called Nehushtan).”

What’s intriguing, though, is the application of this story with Christ.

Christ says in John 3:14-15, “And as Moses lifted up the serpent in the wilderness, so must the Son of Man be lifted up,   that whoever believes in him may have eternal life.”

The serpent is used as a symbol of evil in the Bible (in the garden in Gen. 3:1-5, and Satan is called a serpent in Revelation 12:9), why would Christ use this imagery of himself? The serpent is a symbol of evil, however, Moses makes a bronze serpent, and in order to do that, Moses needed to put the bronze through fire in order to make the bronze look like a serpent. Bronze is used as a symbol of judgment because of the fire needed to make it pure and pliable, just like we will go through fires of judgment. So the symbolism of Christ being a bronze serpent is a picture of Christ judging our sin and casting it as far as the east is from the west. And just like the Israelites were delivered when looking upon the bronze serpent, so we will be delivered when we look upon and believe in Christ.

From here, the Israelites continue on their travels, and Moses gives us details of the route they took in Numbers 21:10-20. They settle for a short time by the Arnon River and we see a familiar story.

Look at Numbers 21:21-22. That sounds familiar, doesn’t it? It’s the same thing asked of Edom. Edom puffed out its chest by bringing out their military to oppose them. King Sihon, would take it a step further…Numbers 21:23-26. Once again, a nation comes against God, and it is destroyed. From here, Israel will keep moving on, and it freaks out another king. Look at Numbers 21:31-35. More details of these two wars are given in Deuteronomy 2:26-3:11.

Here’s what happened with King Sihon and his people according to Deuteronomy 2:33-35, and the defeat of King Og almost seems “better” in it description of what the Israelites did… Read Deuteronomy 3:3-7.

God has definitely built a strong nation, and that’s what we need to understand. God built it.

Throughout all these descriptions, Moses says God gave these kings and nations into their hands. Sure they fought, but victory was guaranteed. God orchestrated it to guarantee a victory.

The key for the Israelites was that they looked upon the bronze serpent as instructed. If not, they would have been dead.

We go through difficult times, and we can get discouraged, but we need to turn our eyes to God! Do not get bogged down by the troubles of today, know that there is victory and salvation from these difficult times in the future!

One thought on “Turn Your Eyes Upon…a Serpent?”